Ever get so emotional in a match you felt like powering up? Hype is the sign of a great fighting game, and few games can get players on their feet – and screaming – like Dragon Ball FighterZ.

2018 was a huge year for the game culminating in the Dragon Ball FighterZ Saga event at CouchWarriors Crossup. Before the World Finals at the end of January, lets take a look at what the game is all about, then learn about the top players, and how to get into the local scene.

Building on the winning gameplay formula of “VS” games, Dragon Ball FighterZ (DBFZ) features lengthy juggle combos, high-speed aerial combat and frequently-used, powerful super moves. This combination makes matches feel like the clashes between godlike beings you would expect from the Dragon Ball anime. Getting to pick your dream-team of 3 Z Fighters or assorted alien menaces adds to the feeling that each match is some new, crazy episode of the beloved saga.

The natural combination of Dragon Ball and fighting games has produced other titles over the years, although none of them play similarly to DBFZ. Starting with the popular Budokai series in the early 2000’s, most of them feature 3D combat with a focus on movement and scale rather than traditional fighter mechanics.

But since DBFZ was developed by Guilty Gear & BlazBlue creators ArcSys, they chose to depart from that formula in favour of their usual movement-focused 2D gameplay. Now more accessible to fans of other fighters, and with mainstream appeal from the Dragon Ball cast and setting, DBFZ has fast become one of the world’s most played fighting games.

That global popularity has also translated into strong local scenes all around AU/NZ. High level DBFZ competition is available at regular tournaments anywhere those events are held! Our region has its own official online tournaments as well – like the 2018 Dragon Radar qualifier won by top Melbourne player Zed. The popularity of the Dragon Ball franchise is bringing in a lot of fresh fighting game players to try this new game. Fortunately, behind fast pace and dizzying combo potential DBFZ has a number of thoughtful touches to help you train up.

Firstly, the idea of “auto-combo” attacks have been developed to be more of a complete playstyle. As with some other fighters, mashing light attack will dial up a full combo which would normally take complicated inputs to perform, getting you some good damage. But DBFZ also lets you perform auto-combos with the other attack buttons, each of which has different tactical advantages. There are a few other essential options, each performed with one or two buttons. Every character can do an anti-air move as their opponent flies/falls towards them with down+heavy. If your opponent is just blocking everything, you can catch them with an overhead (forward+medium) or a Dragon Rush (light+medium attack). If you can’t get close – maybe they’re throwing Ki Blasts – try a Super Dash (special+heavy) or Vanish behind them (medium+heavy).

The final step in gameplay is to work out Assists. The characters you aren’t currently controlling can jump in from the sidelines to add a specific attack to your combo, give your opponent something extra to block or zone them out while you power up for meter (light+special). Different characters have their own Assist moves, so you have to work out what each of yours is good for – or build a team that has the ones you want.

While learning harder combos and setups will let you kill opponents in fewer hits, understanding how to land hits and defend yourself in the first place should be the priority. In high level play, pressure strings can be oppressive and many combos will be lethal. But the default mixup options of Vanish and Super Dash can be punished, and having the read on these attacks will reward you across every game of DBFZ.

For experienced FGC members the most significant mechanic of DBFZ is the Tag system. Like the VS. series, Skullgirls and other similar games, you need to understand the potential of your character’s assists and maintain a gameplan throughout each match. It’s essential both to have your team order worked out AND to know what each of your characters can do with meter and Sparking should they end up as your anchor.

While there are definitely top tier standouts among the cast, very few are considered unplayable. The examples set by top players show that it’s usually better to find a team that suits your playstyle – whether that’s big-bodied grapplers, those with high-damage combos, the best rushdown game, or anything else. If you have one character who is the apple of your eye, just fill out the team with consistent high-tiers who provide good assists, like Gotenks or Vegeta. Compared to some other tag-based games, the metagame here is still wide open.

If you’re looking for top players to follow, a good place to start is the game’s first EVO champion and multi-game superstar SonicFox, of team EchoFox. Moving over from dominating Netherrealm Studios games, he displays the same incredible knack for reading his opponents in DBFZ. A host of Japanese players are constantly challenging him, led by rushdown king and Adult Gohan master GGP|Kazunoko and the popular CAG|GO1 (go-ichi), famous for his impenetrable defense.

In Australia, there are standout players from around the country: the aforementioned Zed, BAM10 champion Baxter, Kanga|DAILOU and our top finisher at EVO, Perth player SaltyParis. In addition to monthly tournaments like Sydney’s York Street Battles and CouchWarriors ranbats in VIC/QLD, DBFZ has been a feature game at every recent major tournament. You can safely assume that if an event isn’t specifically for a different game, you’ll find Dragon Ball there.

The premiere international competition is the official DBFZ WORLD TOUR, where champions of each tournament stop are awarded one of the seven Dragon Balls! Not only are these some of the coolest trophies in the FGC, they qualify their owners to the eventual World Finals.

Another benefit of being the current top game, those searching for DBFZ content and communities are spoilt for choice right now. Many fantastic players both locally and internationally are streaming their gameplay, in addition to the availability of full tournament VODs.

For those looking to join a broader community for discussion, check out the Facebook pages run by local TOs, and the “Australian Anime FGC” Discord server. There’s plenty of people out there at all levels of experience to help you find practice partners and improve your game. 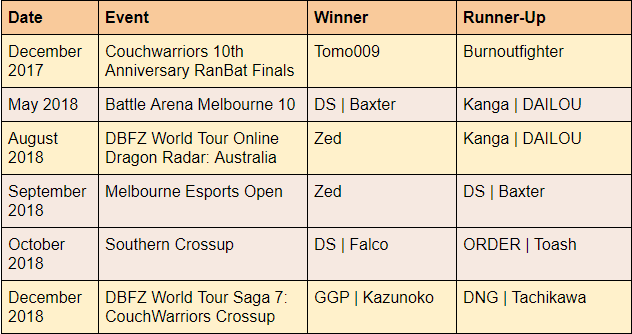