#BAM10 is the exciting culmination of a decade of community love, effort and hype!

BAM10 is proud to represent Australia in global esports series:

Tournament Entry Fees:
$10 per tournament (or as listed)

Signing In :
Doors open at Melbourne Convention and Entertainment Center on (Friday at 4:00 PM.)
You will be required to go to the Registration and Information desk, and speak with our Tournament Official’s (TO’s) at 4:00 PM to pick up your passes (competitor or spectator) to have access into the Tournament Area.
You are able to sign in and pick up your pass at any time over the weekend, just please account for the large amount of pass pickup’s on the Friday.

IMPORTANT:
If you don’t have a pass, then security will not let you into the tournament area.
Please ensure you have your pass visible at all times.

Pick Up:
You will need to show a valid form of ID (PayPal Receipt / Smash.GG Account / License) when speaking with the TO’s to pick up your pass.

Speak to our TO’s at the Registration Desk to pick up your passes
Once you have your pass, you will be free to play casuals or when scheduled, play your scheduled matches. 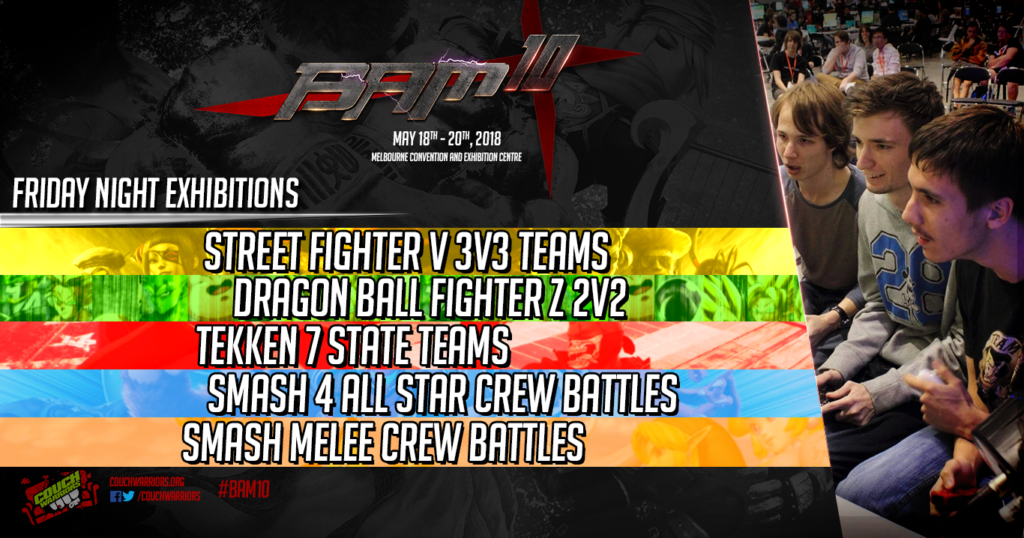 DRIVING IN :
If you are driving in, there is parking both available at Crown Casino as well as South Wharf – DFO.
Parking in both of these area’s is paid, so you will need to observe the relevant requirements.
There is also other paid parking in the city and you can find more information here :
https://www.secureparking.com.au/

Most Importantly, Good Luck and Have Fun!