We now have the complete first month of CWL Online play for 2022 in the books, as the monthlies for Smash Ultimate and Guilty Gear: Strive rounded out February. Even at this early stage, the lack of offline ranbats means the results for CWL Online will be incredibly important to the seasonal points race.

Many eyes were locked on the stream to find out who would claim the first leaderboard points of the year – and an Astro Gaming A20 headset into the bargain.

THE RUN IS COMPLETE! @ryce_fryd takes the Feb Smash tournament and scores themselves an Astro A20 headset! Your top three is as follows:

Out of all the CWL Online games, Smash Ultimate has shown an unprecedented level of competition during the pandemic years. Combine the deadly ranks of wifi warriors with the vast character variety of Smash, and you have a recipe for shocking upsets. Defending 2021 champion Fryd Ryce knows how fast things can change in CWL, having been the hot new talent himself not too long ago. But in 2022 he is a marked man, and this tournament 46 other players were gunning to bring him down.

But of course, that’s far from the only story which was unfolding up and down the bracket. Early in Winners side we witnessed an all-Sydney grudge match between Kanga and CBB|BigMrAMan. The two had previously met in a barnburner set during Kanga’s own charity tournament, and the rematch proved to be just as close.

Even as those two rivals duked it out, Fryd Ryce’s first tournament as reigning champ got off to an awkward start against MilkMeme. The “Mii Swordfella” aficionado sliced up Ryce in a stunning 2-0, leaving him to stare down a long Losers Side run if he wanted any CWL ranking points this month. The champ duly rallied back with a few fast sets to take his place in the Top 8, but then the going started to get really, really tough.

.@ryce_fryd takes an exciting set over @unfezant_ to stay in the tournament!

Up against Unfezant in Losers Quarters, Fryd Ryce immediately fell two games behind and had to battle back to a last-game, last-stock situation before Thundering his way out of it. His next assignment was the runback against MilkMeme. Once again things came down to both players’ last stock of game five, but Fryd Ryce cleaned things up and controlled centre stage to secure a place in Losers Final against GG|Kinaji.

.@ryce_fryd stakes his claim as the next king of the pirates as he advances to Losers Final!

This time it was the reigning champion who got out to a 2-0 lead in the set before Kinaji – himself on a thrilling run of form with Snake – came roaring back to tie the set. Final game, final stock, both players over 100%… what do you think happened?

.@ryce_fryd completes an insane run to battle out of losers and INTO THE GRAND FINAL!

One might naturally expect Fryd Ryce to have the momentum then, as he finally made it back to Grand Finals to compete against Queensland’s Bro1. But Bro1’s Wolf had been the one to knock all of Ryce’s Top 8 opponents into Losers to begin with, and in a much more convincing fashion. Still, whether it was the matchup, the momentum or even the internet connection between these two, Grand Finals was all one way traffic.

LADIES AND GENTLEMEN, WE HAVE A RESET!

Ryce ran rings around the Wolf with relentless pressure and Pikachu’s signature tricky recovery allowing him to stretch stocks and clutch out game after game. A quick 3-1 earned the reset, with even that lost game coming down to the final blow, before an even more convincing 3-0 capped off what ended up as an affirming start to Ryce’s championship defense. He won the maximum leaderboard points and Astro A20 headset, but the stiff resistance faced this month shows how difficult a repeat CWL win could be.

The GG:ST scene has been constantly grinding through community events and weeklies even during the CWL offseason, so those watching the stream were treated to fluid high-tier gameplay right from the jump here. A clear upper echelon of players steadily carved their way through the bracket, most notably TB from Perth, saf, Popokilloray and one of our 2021 CWL co-champions, eveAZN. Though that’s not to say the incumbent elite found their path empty of challengers.

One especially eye-grabbing performance came from Bonheur, who had the stream chat absolutely melting down and commentary in conniptions after some bold and beautiful Anji play. Backing up the graceful stuff with great technical play, Bonheur bounced back from a loss to eveAZN to make Losers Quarters before being eliminated by TB in a hard-fought 1-3 set. The run was enough to earn him the Player of the Week nod, as well as some great footage for his personal highlight reel.

Come for the Guilty Gear, stay for the conversions and parries!

In the end, things boiled down to the same four names who had started the day so strongly, as they made up the winners side contingent for our Top 8. Popokilloray triumphed over TB in a set which was nailbitingly close, setting up Winners Final against saf’s Ino. Saf was able to secure the first game but this only seemed to wake Popo up, as one of the biggest threats in CWL uncorked six straight rounds of domination to end the set.

.@popokilloray is on a tear, advancing to the Grand Final!

Meanwhile, eveAZN and TB met up in Losers Semifinals. Each had been able to see off spirited challenges in the prior round, but this clash took things to the next level. In particular the character knowledge shared by two Nagoriyuki players led to some excellent exchanges centered around eveAZNs blood meter – and some massive damage when he found himself on the losing end of them.

TB was able to make it past the reigning champ 3-2, but not past saf in Losers Final, leading the latter to a rematch against Popokilloray for all the marbles. Despite the steamrolling in their prior set, saf was able to keep things close as their set went all the way to game five.

.@saf_gc is coming back, fighting to stay alive!

Ultimately, Popokilloray’s endless pressure proved too much once again as he denied the reset and locked up the Astro A20 headset along with first place on the seasonal leaderboard. TB and saf also received prizes courtesy of Bandai Namco themselves, who donated copies of Tales of Arise as part of their ongoing support for CWL. Cheers, Bamco!

Player of the Week!

As we step up our CWL coverage this year, the CouchWarriors team want to celebrate the efforts and achievements of our players beyond the winners’ circle. Genius plays, gutsy comebacks, personal breakthroughs and sublime style give us many of our favourite highlights, and our new Astro Player of the Week award will shout out the players who create those moments. 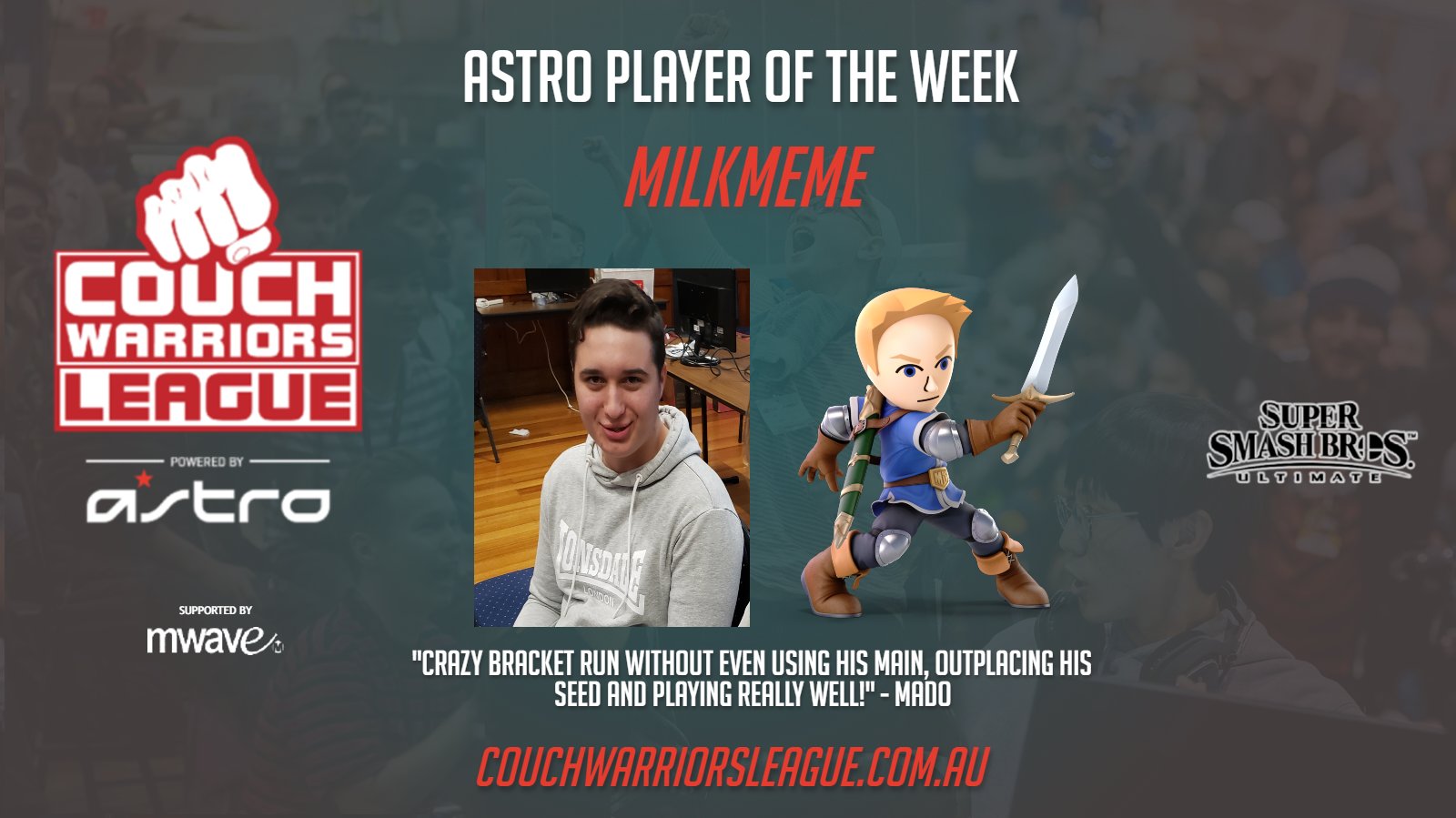 For Smash Ultimate, MilkMeme got the nod for taking the scalp of Fryd Ryce which helped set up this all-time classic tournament narrative. Of course, MilkMeme also carried his own flag all the way to 4th place, scoring wins over SPCT|Dura and Coleman along the way. Even in the eventual losses (to our two grand finalists) he stood his ground well, and expectations are definitely rising around MilkMeme for the coming months.

.@ThatMilkMeme has some fight left as he wins stylishly!

As I let slip above, our other Player of the Week recipient was Bonheur, who generated a lot of buzz and goodwill in a strong Top 8 run through the Guilty Gear event. 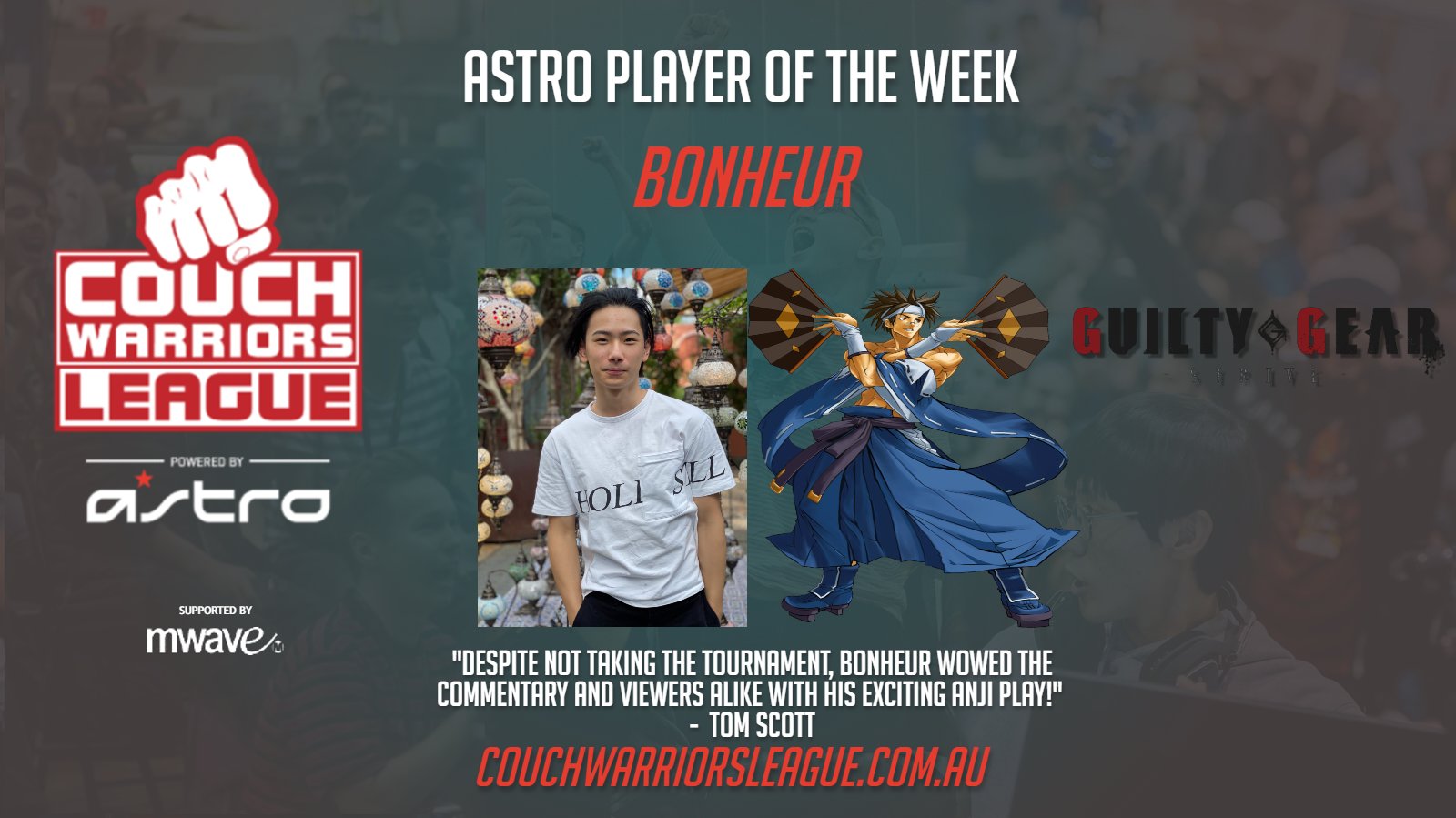 His ability to call out top players with Anji’s counters and convert from all different opportunities demanded some extra recognition.

Bonheur’s got some CRISP play!

Congrats to all our Player of the Week honorees and points winners from February!

You can see the impact from this first month of play on the CWL 2022 leaderboards. If you want to watch the fireworks live this month, our March events will be live every Wednesday evening on our FGC and Smash twitch channels. And of course, you can sign up for events yourself on Smash.gg – find all the links through our Twitter!