“ROF IS BACK!” as he takes a commanding win over @AwildLLAMA and wins the first CWL event of 2022!
? @rof_uu
? @awildllama
? @pahndavs

The first SFV tournament of the year proved 2021’s contending group are still just as hungry after their holiday break. Before the event, Somniac named AwildLLAMA, Rumours and ROF as the biggest threats to his title defense this year. And ROF immediately proved how right he was:

The first meeting of the Melbourne Runback for 2022 ends with @RoF_uu delivering the first perfect of the year to @Somniacs!https://t.co/8PI72az9FH #sfv #cwleague pic.twitter.com/vFhx758kti

When you start your run by hanging some golden letters on the reigning champion, you know you’re about to have a good day. Sure enough, ROF swept imperiously through the 24-person bracket to reach AwildLLAMA in Winners Finals. Yes, he did drop a game or two to fellow legends like Somniac and Rumours, but then ROF was also playing some of those games on his Seth:

The appearance of this secondary character fed into a controversial narrative building in the commentary booth: has it been Birdie holding back ROF from returning to form? It’s quite a statement to imply any form has been missing, given that he made the Top 4 of last year’s CWL. But ROF’s amazing performances in years past have led fans to expect excellence. So it was doubly satisfying to see him look so good on his Birdie, comfortably controlling the pace of each match as he defeated AwildLLAMA in their two finals bouts.

YOUR IRON FIST CHAMPION FOR FEBRUARY IS @bobbybadinga! THE TRAINING ARC IS COMPLETE! Congrats to our top three:

Reigning Tekken 7 champion Subject described the current scene as a shark tank where “you really can lose to anyone”, which reflects the depth and relative evenness of results we’ve seen in the last two seasons. Our first event of 2022 continued where 2021 left off, with tons of close matches and small upsets breaking out across the bracket.

Subject took his signature Dragunov to Winners Semis before being tumbled first by Bobby, and then by DHT|Yagami in a nailbiting five-set eliminator.

We’re so far into the tournament and clutch plays are STILL HAPPENING.

After a 2021 championship season built on consistent CWL Online victories, it underlined the challenges Subject will face in his quest to go back-to-back. The competition only grew more heated between the remaining players, as this tournament would have been a statement win for any of them. But it was Bobby who earned it with a great Winners side run, taking 6 games off 6 weetbix across their two sets and throwing out fearless pressure with Raven en route to 10 CWL points.

.@BobbyBadinga advances to GF in a dominating Winners Final!

Player of the Week!

As we step up our CWL coverage this year, the CouchWarriors team want to celebrate the efforts and achievements of our players beyond the winners’ circle. Genius plays, gutsy comebacks, personal breakthroughs and sublime style give us many of our favourite highlights, and our new Astro Player of the Week award will shout out the players who create those moments. 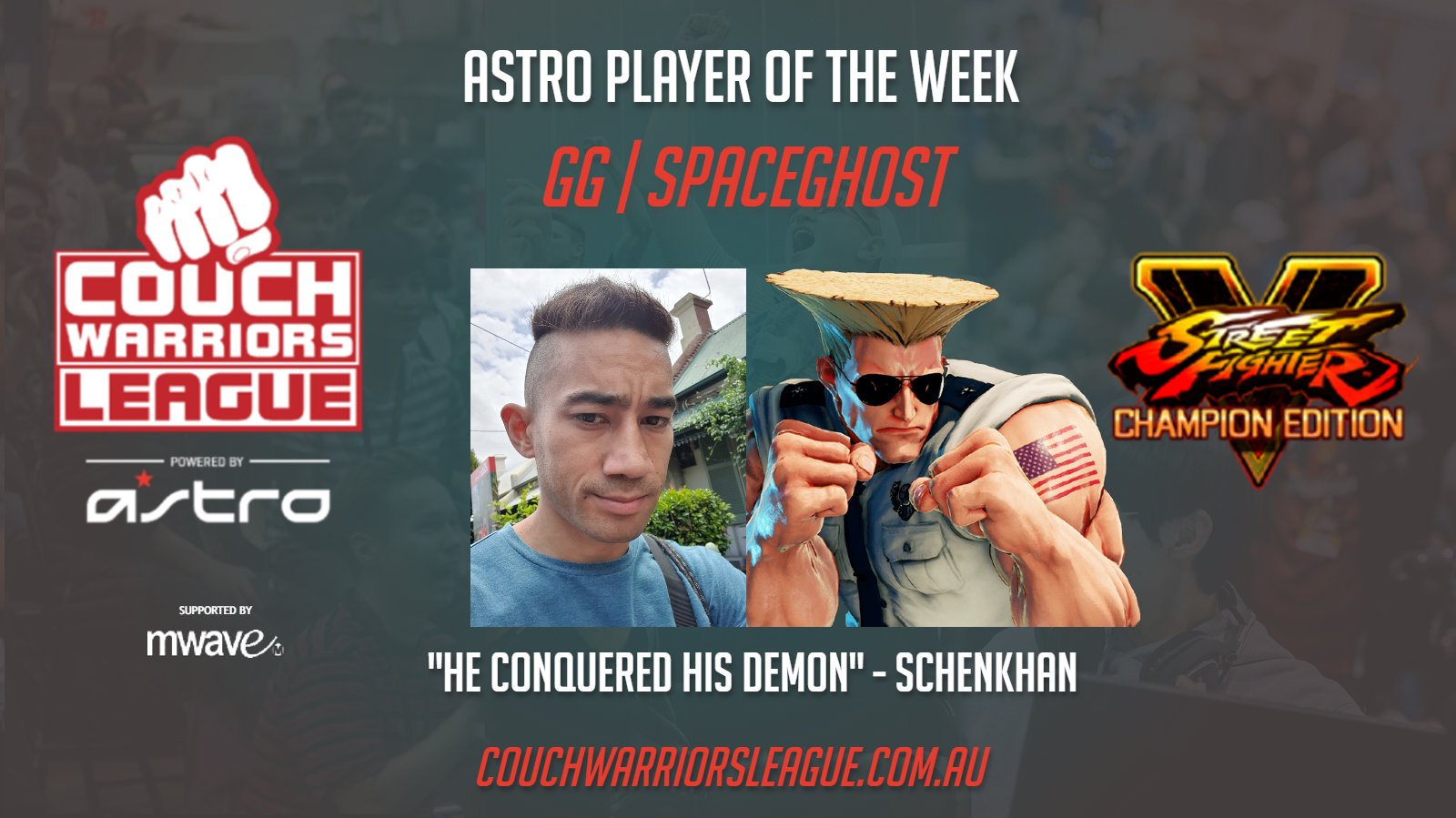 For week one, the honours went to GG|Spaceghost. Undeniably an elite player over the last few years, Spaceghost has still struggled to crack the highest echelons of success. In particular, Somniac has been a bit of a bracket demon for him. So to run up against the defending CWL champion on Losers side, just after a rough 0-2 loss to teammate Rumours, looked like a worst case scenario. But Spaceghost managed to shake off the curse of yesteryear and triumph 2-1 over the wily Bison, before busting out some ridiculous corner combos in a valiant quarter final effort against pahnda. A well deserved first winner.

.@xaverunsgdlk looked like he wasn’t gonna make it, but then busts out a hell of a combo to stay in the fight!https://t.co/8PI72az9FH #sfv #cwleague pic.twitter.com/F44BrIrQ4q

Week two’s Player of the Week selection was 6 weetbix, whose huge run deserved some extra recognition despite coming up short in Grand Finals. The man they call “DaBix” has become a true contender over the last year of CWL play, and looked deadly confident on his Lidia no matter what the situation.

Congrats to 6 weetbix and Spaceghost on being our inaugural Player of the Week honorees! We’re excited to see who else will step up and show the heights of their brilliance in the weeks to come. 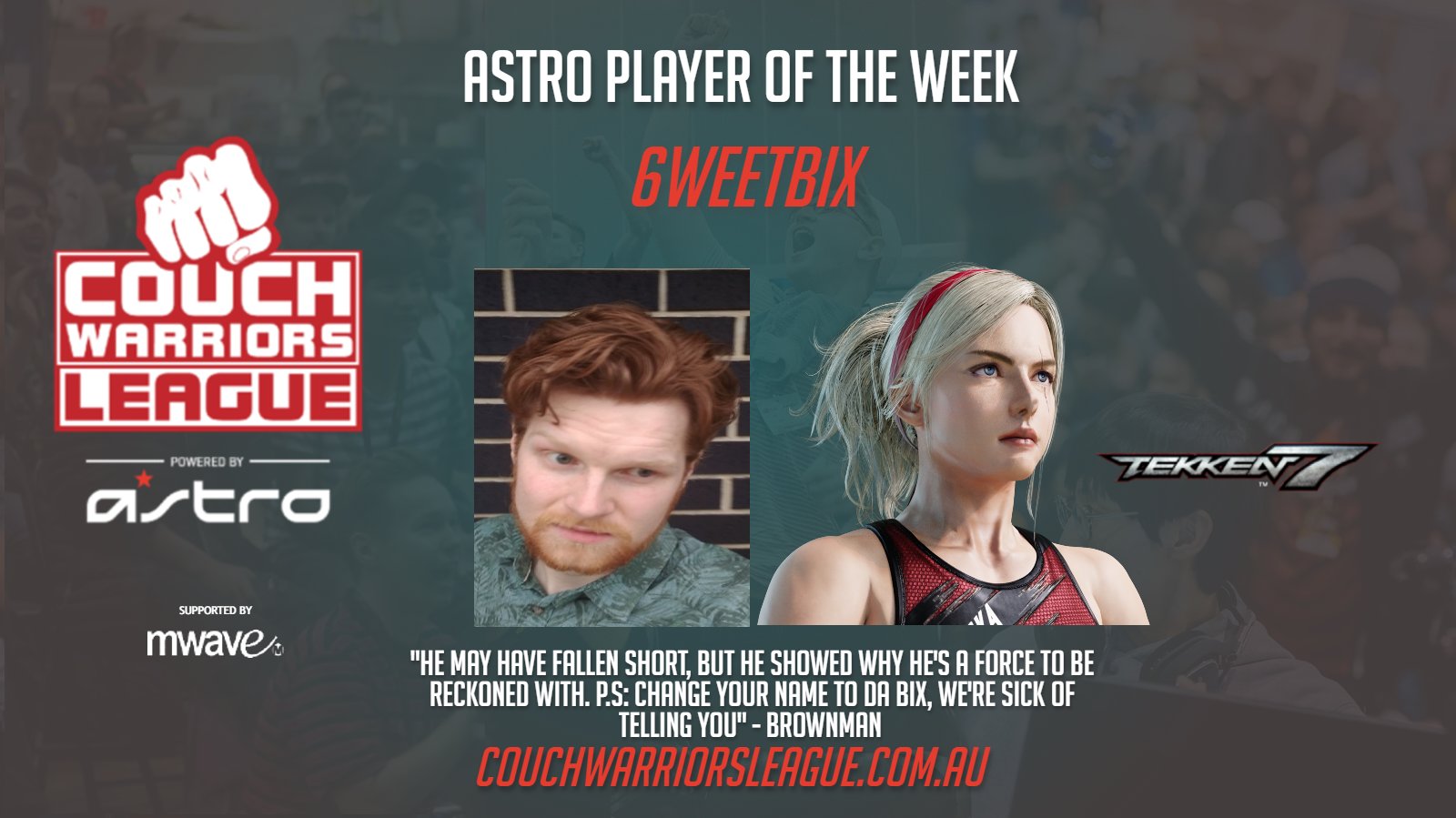 Coming up in the next few weeks are our first CWL Online events for Smash Ultimate and Guilty Gear: Strive, as well as offline events in South Australia and Queensland which will help to shape our 2022 leaderboards. You can find more CWL coverage both on this site, and live every Wednesday evening on our FGC and Smash twitch channels.