Another awesome month of online competition brings new developments to the CWL leaderboards!

The weekly CouchWarriors League Online events each focus on one of the major games supported by the League, with the placegetters receiving League points as part of our ongoing tournament season. Our monthly winners also received Steam vouchers from CouchWarriors.

A handy reference for our online tournament schedule during the pandemic period is on Twitter. You can always check the current standings for each game and player in CouchWarriors League here.

The Street Fighter CWL tournaments have started to take on a certain inevitability at this point, and it’s a worrying one for everybody not named Travis Styles. The Perth poster boy has put the national scene in a stranglehold, showing clean play and incredible confidence in clutch moments. He’s actually gathering momentum – this month going over Xavier “DS|Somniac” Nardella clean with Chun-Li, after being punished for that character pick in their last few meetings.

July Street Fighter V in #CWLeague is a wrap!@Travis_Styles_ with Chun Li takes it 3-0 over @Somniacs making it the second #SFVCE win in a row!
Travis wins a $50 Steam voucher from us and the top points for the leaderboard!https://t.co/hZfHncle57 pic.twitter.com/gSVgNfdKQk

At least Christian “ORDER|ROF” Dedalija made a welcome return to the podium, keeping a nose in front of Travis in the CWL standings – for now.

Also holding strong at the top of the ladder for his game, Josh “Sora” Lyras turned in one last win for longtime sponsor Darksided – as of this month, he’ll be the hottest free agent in Australian Smash. We also saw a notable run from prolificjuice, who scored his first CWL points here! Never too late to start the grind, although with Sora nearly double the next highest total across any CWL game, it’s doubtful anyone will be catching him.

Tekken continues to be unpredictable and wide-open, with this month’s tournament starring a fresh rotation of top players – though not at all new to the national scene.

Tom “yiggs” Ho is a pillar of Tekken in Queensland, and a real Xiaoyu loyalist. His run through the bracket overcame a string of tough matchups, showing the kind of craftiness you only see from a true veteran.

Feel the #Tekken heat in the middle of winter with more action like this from #CWleague@yiggs shows some anti hellsweep :genius!” to get past @daitooka in pools
Watch: https://t.co/8PI72ah0rz pic.twitter.com/vUVr1rv2xc

yiggs was the only competitor to give eventual champion Harlem a real challenge, but despite taking some huge rounds in Winners Finals he fell very slightly short.

Harlem’s win was his 2nd since the CWL moved online, and took him into 3rd overall place. But since none of the other players ahead or tied with him have managed to score a point from the last few months of netplay, there’s a real chance that next month’s CWL could see Harlem become the overall leader!

This month’s Ultimate tournament featured some lively competition after previous CWL Online endboss SebPro101 took a hiatus (to grind some Valorant). In his absence, we saw a struggle between the rapidly solidifying new guard of the scene. The early rounds quickly whittled us down to netplay’s finest, allowing us the chance to enjoy some fine sharpshooting along the way:

The snipe from @DefectiveDagger ?
Come watch the top 8 of this months #CWRanbat

Things turned more serious as we entered top 8, with Andrew Lin, Aiden “Dura” Scalzo, Micah “FS|Xettman” Crossett and Harry “Nurd” Malikoff all going through on Winners side. But the x-factor was Bradley “DD” Kun, lurking in Losers after taking a tough loss to Andrew earlier in the day. One by one, those who dropped down were snapped up by the BAM Path to EVO champ, until finally Xettman was able to finish him off in Losers Final.

Xettman had been crushed by Dura 0-3 in their Winners Final matchup, but when the two met for a runback things were on a different level. A tight 3-2 reset let Xettman to break through with a 3-1 win in the second set for an impressive tournament victory!

Congratulations to @_Xettman for winning this months Smash Ultimate #CWRanbat

He capped it all off with a sponsorship announcement, joining the Firescale Esports team alongside several other promising smashers at the end of the month. Congratulations to Xettman, and to all our other winners for July – good luck defending your title in this month’s online CWL events!

We’ll leave you with a snapshot of the current top standings: 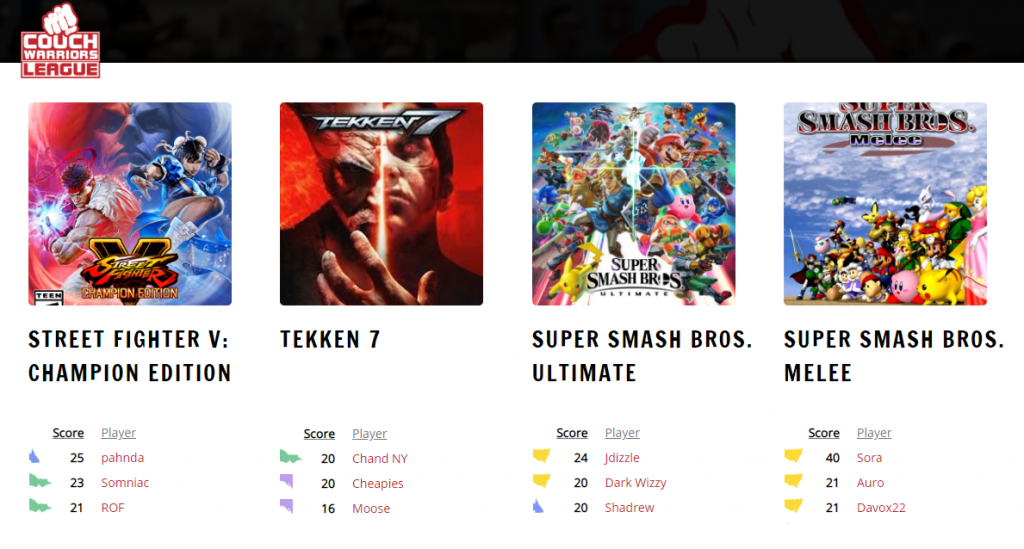