Saturday the 14th saw the final CouchWarriors League 2020 points awarded for Smash Melee. In the now well-trodden arena of The Australian Internet, the top class players of the nation would do battle to try and sneak last minute qualification to next month’s Season Finale, or grab the last few points they need to secure a cash prize for finishing in the year’s overall Top 3!

That Top 3 race has been entertaining and unpredictable across the season, with stars from every state in contention and a relatively small margin separating them. Unfortunately, second-ranked Davin “Davox” Mai sat this thrilling decider. But we still got a two way race between Miles “LGC|DonB” Dobney and Jacob “GZ|Sock” Waddell to see if either – or both! – would place well enough to leapfrog over him and claim a bigger cash bounty.

With both DonB and Sock seeded on the same side of the bracket, there was an obvious chance for them to sort this out in direct confrontation. Both were up to the task and they met in Winners Quarterfinals for the bigtime Fox ditto, with all sorts of money and pride at stake!

DonB clutched out a last-stock scramble on Fountain of Dreams, then surged to a clean 2-stock win at Battlefield to threaten a whitewash 3-0 set. Appropriately, Sock took him to Final Destination – and under those 20XX conditions, we saw the last game’s momentum and outcome completely reversed.

Yoshi’s Island hosted a cagey game 4, as though both players had just realized they had evenly matched movesets and were suddenly hesitant to try and test eachother’s defense. After this awkward exchange it was Sock who caught a couple of mistakes at the ledge and swiftly took the second match point away from DonB to force a deciding game! Game 5 featured some janky side-B usage from Sock, including a brutal and nearly compromising SD, but he pulled himself together when it mattered and made sure he completed the 3-2 comeback; and in so doing, finally made the leap ahead of Davox on the leaderboard.

Of course, the catch is that all of them were fighting over 2nd place, because the $300 prize for overall season champion has been locked up for Josh “GZ|Sora” Lyras since last month. Theoretically a triumphant Davox return in October could have made this title race interesting, but Sora ended up winning that instead – just as he won a staggering 7 of the 9 CWL events he entered this year!

More than 20 points ahead of the other competitors in this event, Sora could have taken a month off himself and still won the pot. But instead, he took another 10 points off the table, sauntering through Winners side with Marth to deliver two 3-1 set defeats to Sock and complete a nearly immaculate CWL season. Bravo, Josh. 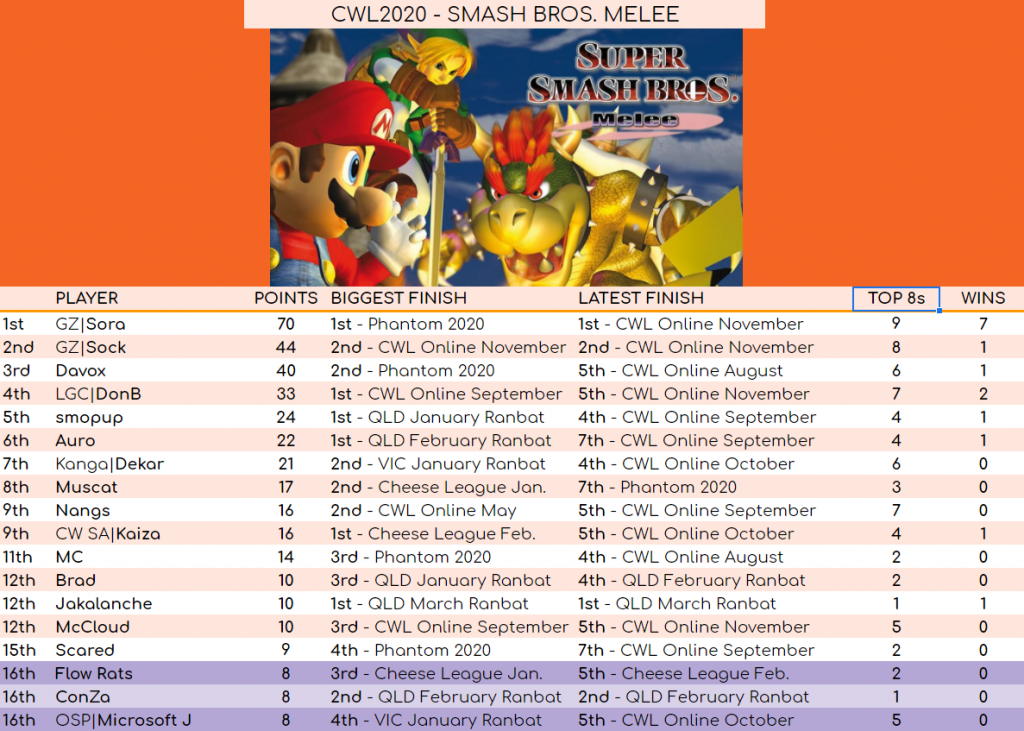 While nobody could begrudge Sora his win for being too dominant, there were high expectations for hype passed on to the Tekken 7 decider this past weekend. There were still three players capable of sneaking into the top spot as the tournament began – and with overall points leader Naveed “Kanga|Chand NY” not in the bracket, the odds suddenly looked a lot better for at least one of them to manage it.

Chris “Stuckles” Stuckey and Harlem “Harlem” Barriball soon emerged as the main challengers, both seasoned competitors who have made consistency their hallmark down the stretch of this predominantly-online season. It seemed like a solid bet to have these two meet in Winners Finals at the least – but you would have lost any cash you put down on it when Stuckles fell 0-2 to the relentless assault of Jack “FAM|CottonSock” McCallum’s Feng in the quarterfinals! This was not the only upset early on in the bracket – dangerous King player The Hangman Kid got caught napping by William “Bobby” Bondarenko 1-2 in the very first round. But elsewhere, the other names we’ve come to associate with CWL Online Tekken: Kun-Mo “FAM|Gun_Mo” Yon, Raphael “FAM|Daitooka” Batskos, and of course Harlem himself – were all doing well. Daitooka got warmed up for his Quarterfinals match against Harlem by overcoming the formidable Abdul “DHT|Deception” Dib 2-1 the round before, proving he was here to seriously play.

But beating back-to-back badasses proved a little much to ask of Daitooka, and Harlem was able to advance at his expense. Harlem then overcame surprise Winners Finalist CottonSock, who had managed to beat out Gun_Mo but couldn’t produce a third straight upset to make Grand Finals Winners side.

Harlem crushes, taking out Winners Final!
See who will climb up to face him in #Tekken7S4 at #CWleaguehttps://t.co/8PI72ayBQ9 pic.twitter.com/AFTz7YUNjG

Meanwhile on Losers side, Hangman Kid was making the runback happen. He blasted by Stuckles, immediately eliminating him from contention. He then thanked Jimmy “BB|McCheese” Mak for avenging his loss to Bobby, before bodying him too. His Losers side momentum was finally corralled by Daitoooka in a hard-fought 2-0. This set up a FAMILY showdown on Losers side, as Daitooka and Gun_Mo went at eachother full tilt. And like any fight between family, it got ugly fast!

Knowing what was at stake, both players really pushed eachother to their limits – but it was Daitooka who finally emerged triumphant. Leaning hard into that momentum he continued to surge past CottonSock 3-1, creating a rematch with Harlem in Grand Finals!

Harlem had played nearly perfectly to this point, dropping only a single game to Daitooka all tournament. He also had extra cash motivation to win this matchup – based on the points totals coming in, Harlem knew only a win would snatch control of overall 1st.It didn’t matter. Daitooka flipped the script with a 3-1 reset before an emphatic 3-0 victory, cutting off any potential comeback to become the November Tekken champion!

Stop the comeback! @daitooka breaks down Harlem’s lead and takes the reset grand final for #Tekken7 in Nov #CWleague!
He wins a tub of @QNTM_NRG and a secure spot in Decembers Finale event.
See you next month! https://t.co/hZfHncCPtH pic.twitter.com/iW0qj13DUE

While Daitooka still finds himself a few points short of the money placings, the kind of resilience and adaptability he showed in this outing will give him way better betting odds when it comes to contesting the other cash prizes in December! With 13th-17th on the final standings tied at 8 points, we may see a tiebreaker announced to decide who’s ultimately invited to next month’s Season Finale!

Only one event remains for this season of CouchWarriors League – the final Smash Ultimate online bracket. You can check out the full archive of this season’s CWL Online events with complete brackets and standings at smash.gg – and as always, the official rankings are available at the CWL website. News on the 2020 Season Finale invitational will be available on this site, on Snowball Esports, and through the CouchWarriors monthly newsletter!