Both the Street Fighter bracket on the 3rd and the Melee competition on the tenth pulled 24 attendees, giving us short but extremely fierce tournaments. It seems like after the initial boom of contenders entering following the double-points announcement, we have once again crunched the numbers down to just those players with the most points, or the most self-confidence.

One of the first and most shocking victims of this intense competition was ORDER’s Christian “ROF” Dedalija. When this CWL season began in January, ROF could credibly claim to be the best in the land at SFV. He had been on a 6-month tear, crushing ranbat after ranbat in his native Victoria and capping it off with a major win at  CouchWarriors Crossup. After taking 1st place in January’s ranbat, he finally showed a gap in his armour by dropping the February grand finals to local rival Xavier “DS|Somniac” Nardella. As Somniac also contends regularly for the nation’s top titles, this didn’t feel like a huge derailment – ROF had 18 points and still felt positioned to be the final boss of Street Fighter for 2020.

A little bit about me and my journey throughout the years.

But then the pandemic happened, and ROF’s year (along with most of the world’s) fell off a cliff.

There was no tournament for him to compete in through March, and he chose not to register for the April online event. By the time he showed up to play in May, his carefully honed edge over the rest of the field had receded, and he finished a lowly 13th. His monthly CWL results since then have been 13th, 3rd, 9th, and 7th – good for a total of 4 leaderboard points – plus a straight-sets exit at the Pax Online invitational after losing to Fraser “FREESER” Johnson and Reagan “TB.KPNZ|GhostChips” Kelly.

A battle of two Birdie mains and old rivals! @RoF_uu stays true and falls to @RumoursAU who is laying down the lay as Mayor Cody.
Catch more #SFVCE in #CWLeague, live now:https://t.co/8PI72ah0rz pic.twitter.com/HbCaXMyGJu

It’s hard-going-on-impossible to maintain the kind of dominance ROF enjoyed through late 2019 indefinitely. But with his leaderboard position rapidly slipping in the face of double-points competition, this month’s SFV event was a great chance for him to stand up and re-establish himself as a threat before the season finale. Instead, he was dealt an early blow by old rival Yuvin “GG|Rumours” Manadeniya, then suffered a shock loss to Berk “TB” Demir to finish 2-2 for the day. Whether or not this pillar of the Australian scene can rediscover his mojo in time for the high-stakes finale will no doubt be one of the biggest storylines heading into December.

One player on the complete opposite trajectory to ROF this year is Ervin-Jason “pahnda” Garanovic. Another decorated veteran of the scene, the Queenslander has always been thereabouts when it comes to national top 8’s, but in the last few months his Akuma play has been untouchably great, leading to a run of 1st place finishes and impressive defeats of big name rivals. He kept up the good work here despite the packed field, bruising past Rumours, Travis Styles, Peter “Rupps” Baron and finally Somniac in Grand Finals.

Despite losing a match in each of those sets – perhaps a testament to his fragile character and fearless play – the overall picture is incredibly impressive, and pahnda absolutely deserves the 2 point lead he now holds over the CWL ladder. 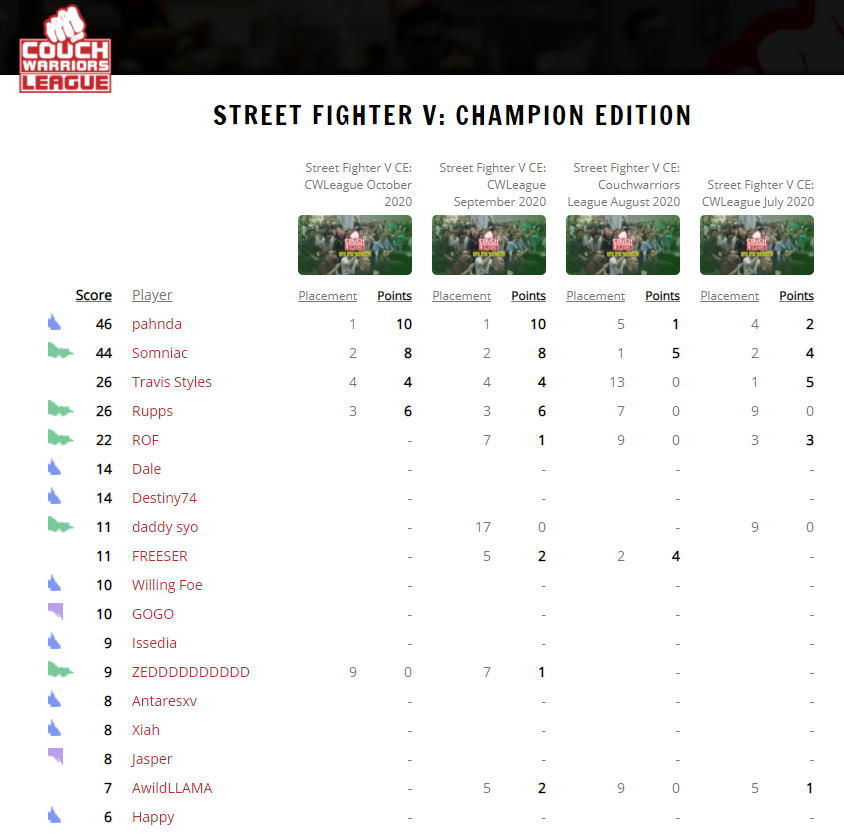 To have a player clinging to just a 2 point lead after 10 months of competition is quite extraordinary. But to have one leading all of his peers by a minimum of 20 over the same span is every bit as dramatic – even if that prolonged dominance might lighten the suspense a little for the viewers! That is the level of perfection we’ve seen from Joshua “GZ|Sora” Lyras this season, with only a single blemish – a nailbiting loss to Miles “LGC|DonB” Dobney back in June – marring an unbelievable string of victories.

This month DonB didn’t even get the chance to replicate the conditions of that lone upset, though Sora would no doubt have welcomed the challenge. Instead, he was ably gatekept by Sora’s teammate Jacob “GZ|Sock” Waddell in both Winners and Losers, setting up the rare spectacle of the same-team, same-character Grand Finals. The actual match was a little less spectacular; Sora had already bounced Sock 3-0 in Winners Finals and repeated the whitewash in Grands, remaining the undisputed king of CWL Melee for at least another month.

Some other noteworthy stories played out in the shadow of Sora’s dominance: Cailan “MM|Cailan” Kingsbury triumphed over Kai “CW.SA|Kaiza” Pisani in the battle of the TOs, although Kaiza was able to turn that into a successful Losers side run which claimed him his first CWL points for the online era, and came within a game of upsetting the heavily favoured David “Kanga|Dekar” Moore! Another player to scramble back from an early loss was Jordi “OSP|Microsoft J” Giannopoulos, who fell victim to an impressive showing from New Zealand’s Alan “ORG|Currypuffs” Quach. Finding himself in Losers much earlier than usual, Microsoft J treated the world to a few matches of high-level Ganondorf before knuckling down with Falco to make 5th. Next week’s tournament will be a special one – the normal Tekken 7 online monthly has been superseded by the official Tekken World Tour regional challenge for Oceania, which should mean we’re in for the biggest and certainly most high-profile event of this interrupted 2020 season!