With a ton of buzz in the air from the BAM2022 announcement, you could feel the extra motivation throughout last month’s CouchWarriors League events. Whether it was perennial champions holding down their turf or a nailbiting duel between evenly-matched rivals, every game on the list had something exhilarating to offer!

Here’s a quick game-by-game breakdown of the action and results before we launch into our April events:

Kicking things off as usual was our online bracket for Street Fighter V – a mature fighting game which still has a lot to teach us. For instance: we’ve known for a long time that AwildLLAMA‘s Gill is a pure hype machine, but his plays this month still managed to completely melt everyone’s minds!

THE MARK OF MY DIGNITY, SHALL SCAR THY DNA. @AwildLLAMA takes a hell of a set to advance to losers final!

If @AwildLLAMA keeps winning like this, @eyeamtom is gonna need some more mics.

.@AwildLLAMA with the clutch plays!

It wasn’t enough to take the tournament, as GG|Rumours was finally able to get revenge for all the rounds snatched away and send LLAMA packing. But it was enough to secure a definitive Player of the Week selection and some handy 3rd place points. Meanwhile, Rumours carried on the good fight into Grand Finals, but ran into the absolute brick wall that is ORDER|ROF:

HE DOES IT AGAIN! @rof_uu wins the March Street Fighter V league event, and takes home a $100 @MwaveAu voucher! Your top three is:

The multi-time champion and Birdie specialist continues to display terrific form for 2022: not only sweeping the field online, but going on to crush the VIC ranbat just as easily a fortnight later. Just two months into CWL competition, the gap between ROF and the rest of the SFV field – both in game and on the leaderboard – looks immense.

Our Tekken CWL Online event was dominated by two red-hot players: Bobby and 6 weetbix, duking it out in their second consecutive Grand Final.

Both had to endure some legitimate challenges to their dominance along the way; FAM|Daitooka tried to ambush 6 weetbix in Top 8 with a Heihachi counterpick, while Bobby had to work to slow the breakout momentum of Wo – who’s 3rd place run and clutch comebacks still earned Player of the Week!

THE RUN CONTINUES. @wowowowowoyoyo continues their amazing run to advance to Losers Final!

But it did look like both Bobby and “Da Bix” were hungry for a rematch, and they got plenty of time one-on-one – splitting the full 15 games through three Top 8 sets. The duel was as tense and hard-fought as you’d expect from such an even pairing, with 6 weetbix taking honors first and snapping the multi-month winstreak of his rival. But Bobby bounced back strong from Losers Final with an unmatched killer instinct, able to aggressively seize opportunity no matter how much health was left on his bar.

This comeback by @BobbyBadinga is nothing short of beautiful.

That slight edge was enough to carry the day in a marathon Grand Final reset – but still not enough to settle this fiery rivalry for good. Even on the ladder, the pair are grappling for first. While Bobby was able to secure a clean 20 points with both CWL Online wins so far, 6 weetbix more than made up the gap by taking 3rd place at Cheese League later in the month. Will they be able to settle things once and for all in April’s Online bracket?

Despite holding the 2021 CWL title and taking 1st in the inaugural 2022 event last month, there were some question marks around Fryd Ryce heading into the March CWL Online bracket. That February win only came after a scrappy, skin-of-his-teeth Losers run, brought on by an early collapse in pools. Needing to show some champion’s consistency, the pika-playing prodigy produced the goods: a much sharper 1st place campaign, built on confident reads and merciless execution.

Another 3-0! @ryce_fryd advances to the Grand Final!

But Ryce was not the only one who can go home happy with their play; GG|Kinaji improved from 3rd place the prior month, and continues to look like the most explosive player in the region when things line up right:

Then there was our 3rd place winner and unanimous Player of the Week, INS|Sumi. Busting out some incredible sequences across multiple characters, she had commentators and chat eager for more fireworks. Fellow finalists Wash (4th) and Jamie (5th) joined in to put more fresh names into the CouchWarriors League Top 8. 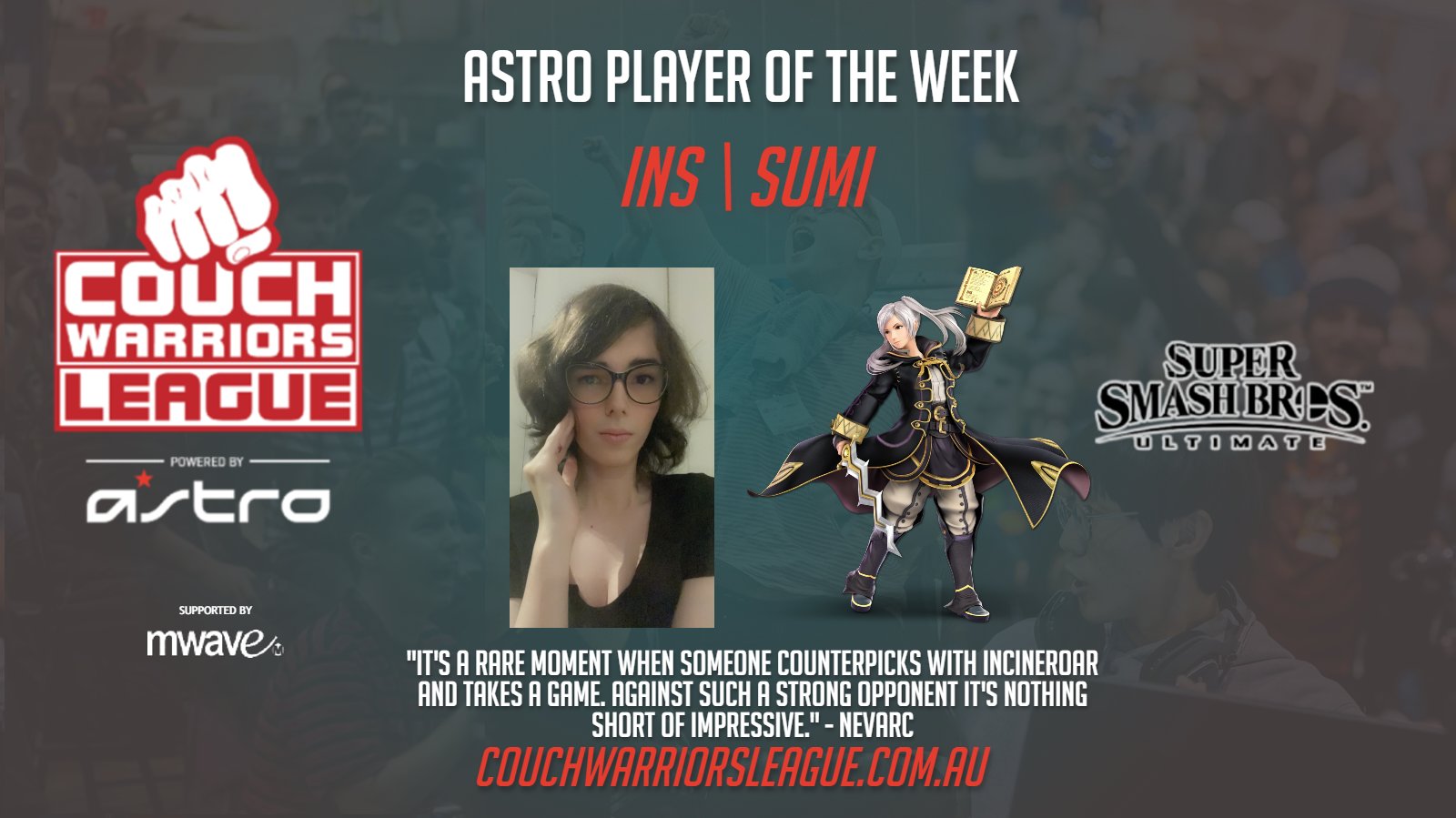 It may be Wednesday my dudes, but Snake got knocked into next Monday.

But we were still not done handing out points in Smash Ultimate. March saw both VIC and SA’s Cheese League resume offline monthly ranking events (Queensland unfortunately being flooded out), and these tournaments immediately put some gigantic names to the top of our overall leaderboard.

In the Cheese League, it was decorated veteran Kanga|Ghost swooping in to scoop the points (and the cash!), while in the Melbourne ranbat GG|Sriks scored a triumphant win over the always-dangerous Kanga|Jdizzle in Grand Finals. With the extra points awarded for offline wins,  this leaves both Sriks and Ghost tied with Fryd Ryce going into April – a stark reminder of how hard the online warriors will need to work to keep up going deep into the season.

The GG:ST CWL Online took place a little too soon for the freshly-released Testament to join the fray, but we were still treated to a smorgasboard of character specialists strutting their stuff in this small yet elite field.

Between Nagoriyuki wunderkind BlitzkrieG, the ever-present threat of TB‘s Zato, LT repping “Jungle King” Leo, and Bonheur‘s Anji antics, we were already set to explore the breadth of the matchup chart. Then of course we were treated to in-form play from 2021 CWL co-champions Tito_Ed on Ram and eveAZN on his own Nago.

But stealing the show from all these big names was a Player of the Week who sports the weirdest name of all: Explosive Fart. 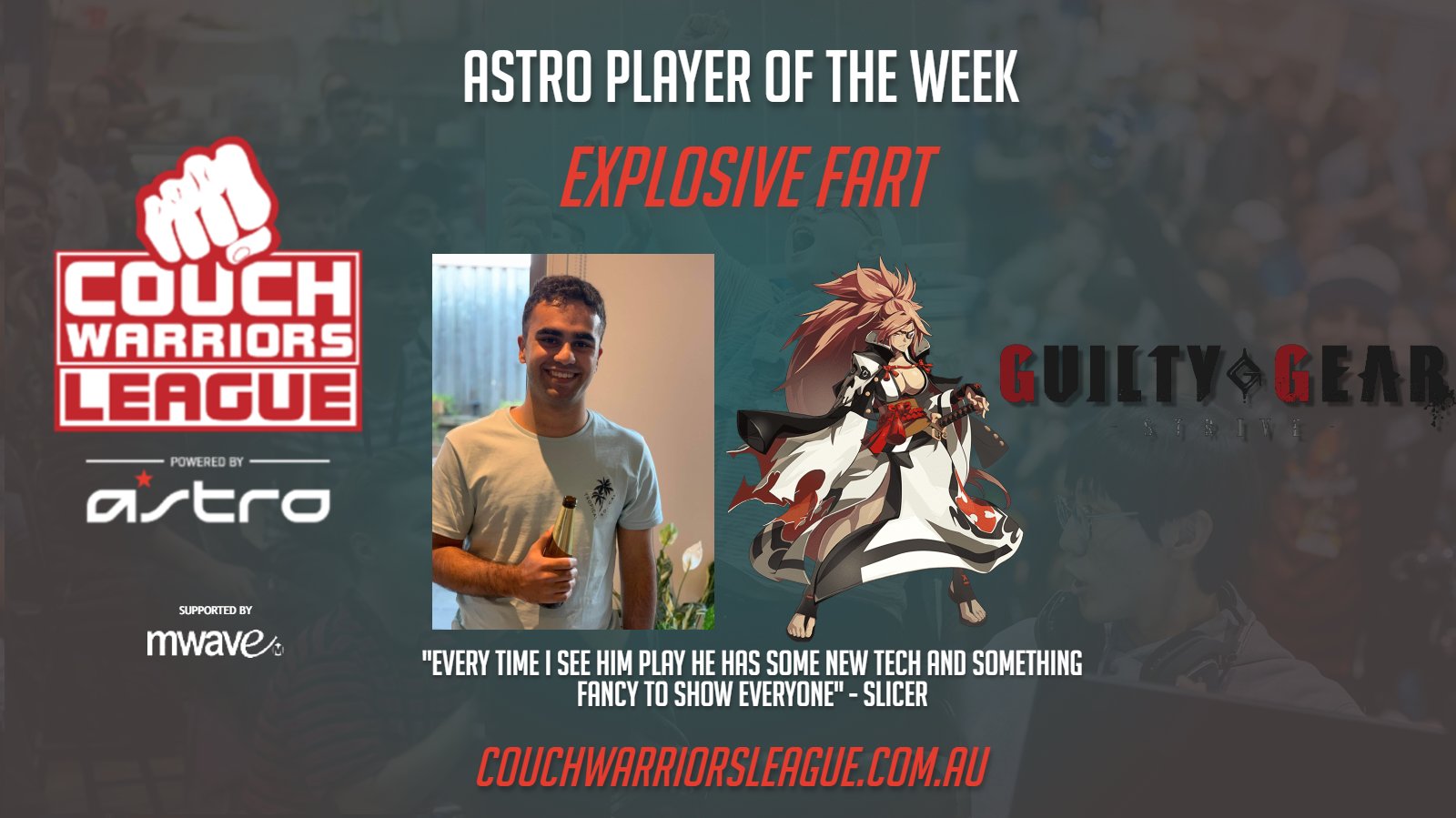 Fart was certainly explosive on his own favourite Baiken, combining fearless aggression with precise callouts or parries to bamboozle opponents. His highlight reel on the night would easily have you convinced he’d taken home the trophy.

Saw it coming a mile away.

Alas, Fart ran out of gas to finish 5th-6th, which left room on the big stage for Tito_Ed and eveAZN to continue their championship rivalry. eveAZN ended up taking both Winners Final and Grand Final, though both went to a final game situation as the two absolutely cut loose.

This was definitely a matchup where the respect between the pair manifested as a desire to put their opponent down as decisively as possible, rather than any kind of overly cautious play – and eveAZN’s signature brand of committed aggression was perfectly suited to the task.

This 10 point win added to his 4 points from February help to keep the defending champion within reach of offline winners BlitzkrieG and M. Baiken, who leapt ahead on the CWL leaderboard after taking out their respective state ranbats. Considering how frequently the top echelon of players are trading wins across other online events, we can only assume GG:ST will be one of our closer points races as CouchWarriors League 2022 goes on!

As always, you can find up-to-date news, results, and leaderboards at couchwarriorsleague.com.au as well as through our social media. To sign up for our upcoming online and offline events, check out the monthly schedule posted on this very site, or search “CouchWarriors League” on smash.gg.