CouchWarriors VIC FGC Ranbats for October 2019 were held on Saturday the 5th at Davies St in Brunswick. Here’s a summary of the results in every game and how the top matches played out. A complete listing of match results and brackets for each game can be viewed on Smash.gg here.

Christian “ORDER|ROF” Dedalija may have barely a quarter of the BAM Path to EVO points that Xavier “DS|Somniac” Nardella can boast, but he was on a mission to change that this weekend. ROF blitzed the field and bopped Somniac twice along the way, sending a clear message to his VIC rival.

END_OF_DOCUMENT_TOKEN_TO_BE_REPLACED

Wondering where you can find details for all upcoming CouchWarriors events for the month in one place?
Well, it’s always a good idea to check our Facebook. But now these simple roundup posts will also serve as a quick reference here on the site.

Check out what we have for October, and look forward to a fresh update on the 1st of each month!

Good luck to everyone signing up to fight at these events! Remember to check back here for post-event results and Path to EVO updates.

CouchWarriors QLD Ranbats for October 2019 were held on Saturday the 5th at George St Brisbane. Here’s a summary of the results in every game and how the top matches played out. A complete listing of match results and brackets for each game can be viewed on Smash.gg here.

Wade “Willing Foe” Ballantyne made a big run after being 2-0’d in Winners Quarters. Not only did he avenge his upper bracket loss in the Losers Final against Michael “GodlyEffect” Wright, but he then whitewashed Kim “Happy” Nguyen in Grands to make it back-to-back ranbat wins.

END_OF_DOCUMENT_TOKEN_TO_BE_REPLACED

For archival purposes, CouchWarriors QLD presents the top placings from our September 2019 Ranbats. View a full listing of entrants and results from each bracket on Smash.gg here.

END_OF_DOCUMENT_TOKEN_TO_BE_REPLACED The team at CouchWarriors would like to humbly thank Ellis Johnson for his work along with his team in Queensland for the CouchWarriors Community. It’s thanks to the efforts of him and his team that we have been able to extend our events and community to the Sunshine State.

Thank you for your invaluable work! It is with great pleasure to present this years community award to our colleague and long time friend, Jason O’Callaghan, for his hard work & contributions for the CouchWarriors Committee. It’s thanks to him and the team at New Game Plus, we have been able to run our events and tackle new opportunities.

From the team and people at CouchWarriors, thank you for all of your hard work and dedication, we couldn’t do it without you.

Battle Arena Melbourne 11 was our largest event yet, we would like to thank everyone that came down to compete, spectator or celebrate our passionate community.

Have some thoughts on this years BAM event? We want to hear about it!
Also, as a thank you, we’re giving away 5 Plantronics RIG 500 Pro Headsets to five vocal attendees!

How do you get one of these beauties? Simple!

We will be announcing the winners at the end of June! Plenty of time to gather your thoughts.

We look forward to hearing from you and good luck!

END_OF_DOCUMENT_TOKEN_TO_BE_REPLACED

Appearing again for the 5th year in a row, CouchWarriors will be bringing your favourite fighting games  tournaments to both days of Oz Comic-Con 2019.

Taking over Oz Comic-Con’s “Gaming Zone” for another year, we will be running tournaments for community favourite games such as Dragon Ball FighterZ, Super Smash Brothers Ultimate, Street Fighter V, DOA6 and Tekken 7 as well as casual set ups, learn to play sessions and more. 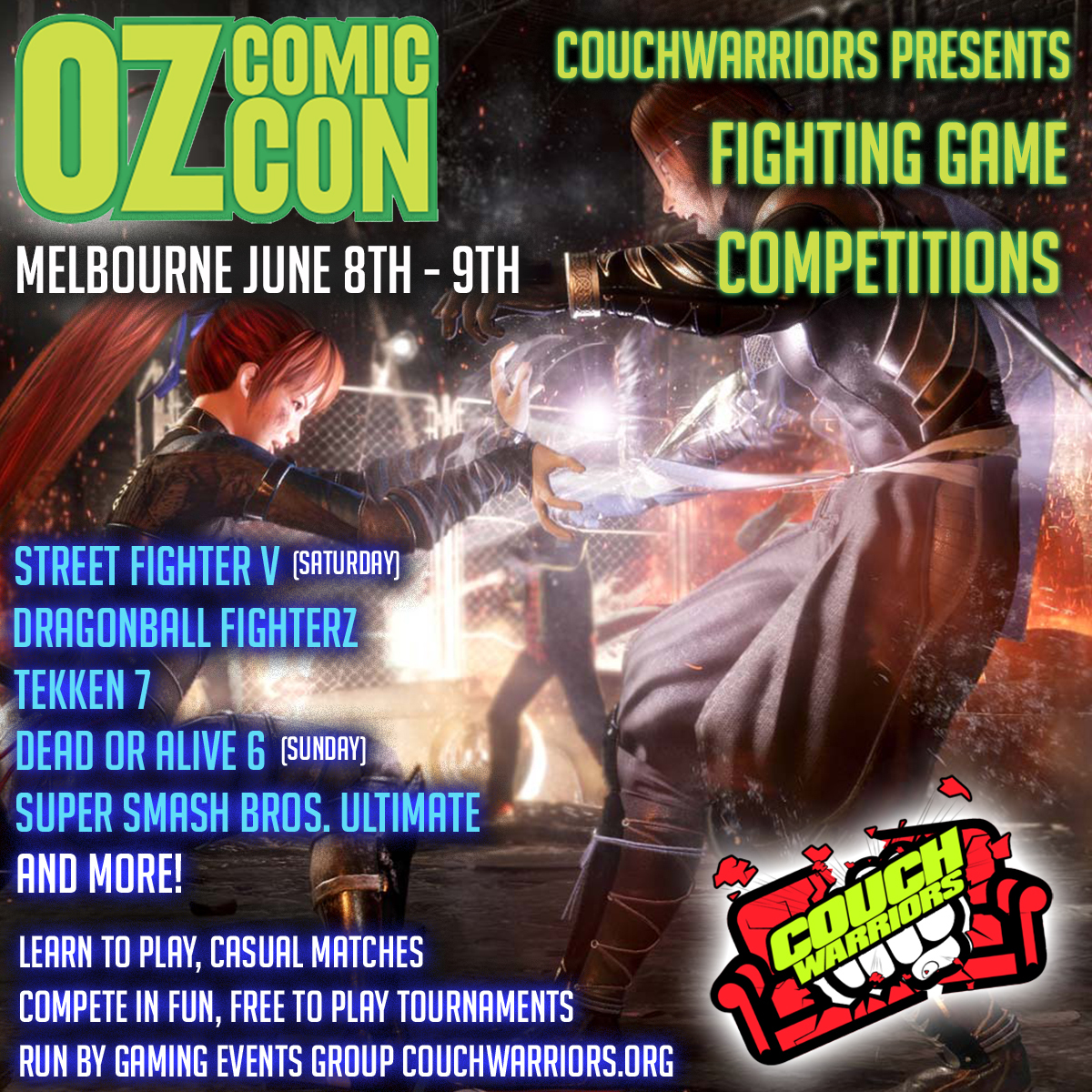 As usual, our convention tournaments are a more casual environment that the usual CouchWarriors events, so if you or someone you know wants to get into the tournament scene or try out a new game there is no better time to give it a shot!!!

For more information about CouchWarriors at OCC2019, as well as the rest of what OCC2019 has to offer, please check out the schedule Here 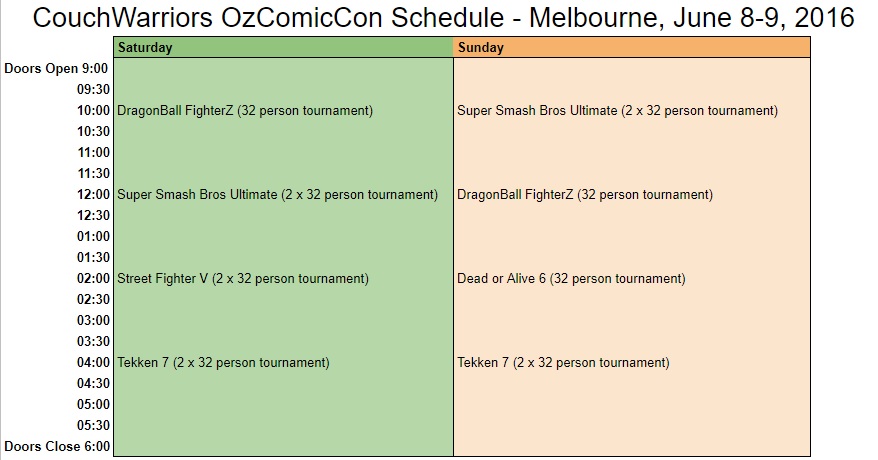