You can buy your ticket to the show – $25 for spectators, $60 for competitors and casual play, along with sign up to individual events through the main portal at smash.gg/BAM12. Now, read on for a quick blow-by-blow of the individual attractions that will make this another amazing BAM!

The heart and soul of BAM, our TO’s will be running official brackets for the following games over the weekend:

That’s a TON of chances for you to become a BAM champion this year! All of these tournaments will feature their own prizes, with timetables staggered across the weekend so you can fit in as many sets as possible. Schedule will be released soon.

We’re also producing a second schedule of community-led tournaments, featuring a broad cross-selection of cult-hit games, special rulesets and other fan favourite stipulations. Check the schedule closer to the date so you don’t miss out on these wild and wonderful side events!

After a great reception for the community artists appearing at past BAM events, we’re renewing our efforts to attract more amazing local creatives to table at BAM12! However, table space will still be limited compared to a normal convention, so make sure you fill in your application at the link below ASAP (closes June 18th).
Those artists who do secure a spot will be showcasing their work to the entire Australian FGC, as well as the audience of the ITZ Gaming LAN event n! The Artist’s Alley is open to creatives from a variety of disciplines, even if their work doesn’t focus on fighting game characters. We just want to see some incredible art at BAM12! Indie game developers have a special reason to have their work appear at BAM. We’re eager to promote the work of local devs who are creating all genres of game to shine before our huge audience of passionate gamers. While it doesn’t have to be a competitive game, indie devs who have presented at BAM before have relished the insightful feedback on mechanics and game balance from attendees. Fill in the application form below (closes June 6th) to negotiate space for your demo or other preview in our dedicated indiecade space on the main BAM floor! Of course, every BAM runs on the skill, charisma and pluck of our heroic volunteers – community members who take the chance to help ensure that the event lives up to its long tradition of excellence. Volunteers get free spectator passes and can also register normally as a competitor – we will work with you to ensure that your volunteer duties don’t clash with your tournament matches! We also treat volunteers to food & drink throughout the weekend, and access to the famed BAM afterparty once the festivities are all wrapped up. It takes all-hands-on-deck to run an event of this size, so fill in the form below, join our TO staff and loyal community, and do your bit to make BAM12 a hit!

STREAMING TO FANS AT HOME AROUND THE WORLD

As befits the status of an international Major, BAM12 will feature simultaneous streaming broadcast for many of the official brackets, as well as some community tournaments! A list of the main games and streams is below, with full details to be announced closer to the event. Note that some official world series events will instead be featured on the international channels for those circuits.

Further channels for more events to be announced

ALL THE MAKINGS OF GREATNESS

Pulling off Australia’s biggest fighting game event ever isn’t easy – but luckily, CouchWarriors has received gracious support for #BAM12 both within the community, and without. We have the tireless efforts of the CouchWarriors committee and regional organizers to thank, along with all of our outstanding volunteers who will be giving their time to make BAM a reality. Our long-time PC hardware sponsor Mwave have once again pledged their support to the event as well as the broader CWLeague tournament season. 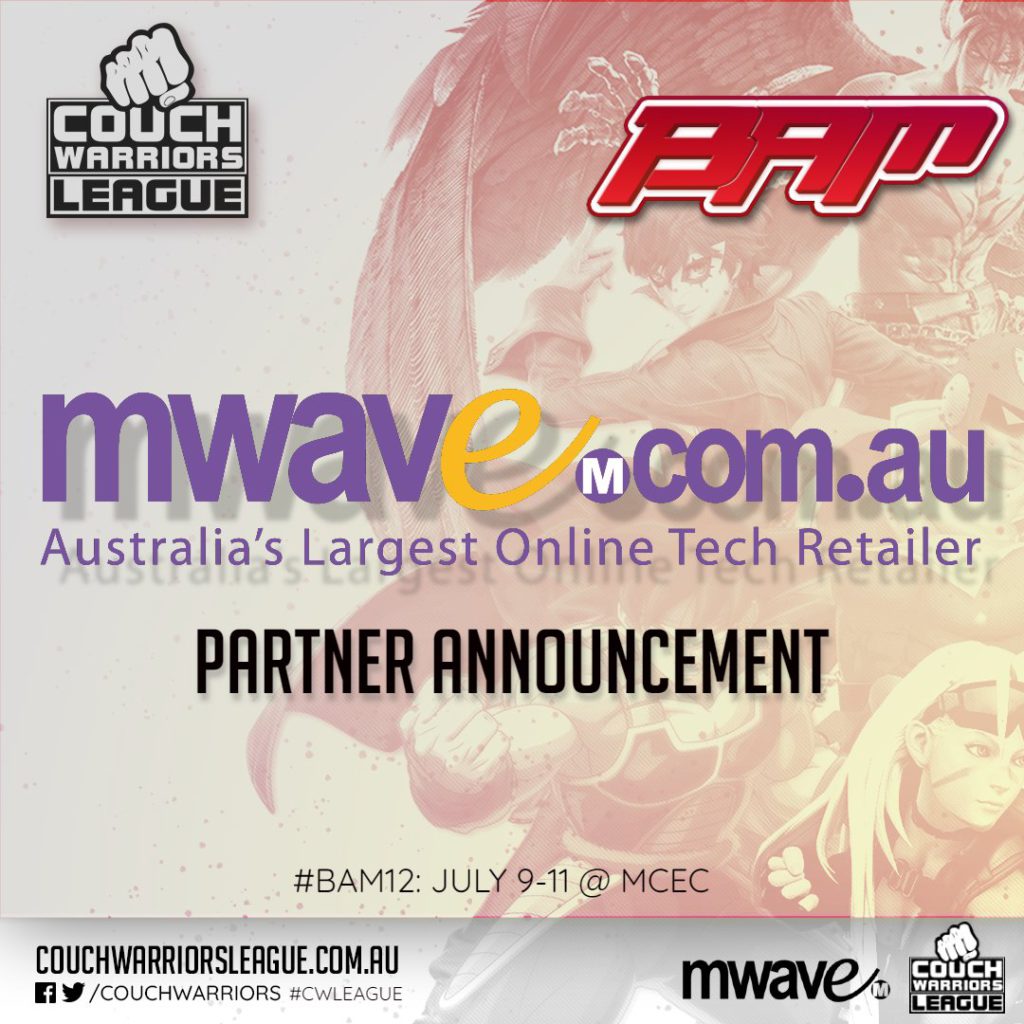 Furthermore, this year marks a new partnership with ITZ Gaming LAN – their 1000-seat BYOC LAN will be taking place under the same roof as #BAM12 over the same weekend. We have arranged for both events to be open for spectators from the other side – giving attendees the chance to take in even MORE exciting tournament action, as well as our range of exhibiting artists and Indiecade developers! Check out ITZ Gaming on social media for further details, or to book a BYOC spot for their event.

It’s going to be an absolutely frenetic weekend, a momentary gaming paradise under one massive roof. Don’t forget to register on smash.gg/BAM12 – and we’ll see all of you in July!

Australia’s major fighting game event brings together players across the nation for fun and competition. It’s the largest open entry esports event in the region and an international destination.

More info to come! Join the Facebook event for updates.

Tuesday September 4, 2018 – CouchWarriors today announced it will be working with the Brisbane and Gold Coast fighting game communities to support growth of events for the Queensland scene.  Monthly ranking events begin this month, and the combined team will launch a new major esports event in 2019.

After a request from QLD based TeamSolid and Checkpoint Esports, with regular venue support from QUT, CouchWarriors brings its expertise, name and resources to join forces and integrate with existing organisers in Queensland. The former TeamSolid will now run events as CouchWarriors QLD.

The aim of joining these communities is to strengthen the events offered in Brisbane and Gold Coast, and for the fighting game scene Australia wide.

“I’ve had the privilege of working with CW during BAM in the past few years, and I am happy to announce that Queensland is finally back on the map with this team up.” said Brisbane based Tom Ho of TeamSolid.

The events will also be part of the upcoming, Twitch powered BAM Path to EVO series. At each of these events every month, players in Street Fighter V, Tekken and Super Smash Bros 4 will earn points leading to an international qualifier at BAM 2019.

Ellis Johnson, QLD Smash Bros event organiser, added “Together with Couchwarriors, QLD really has an opportunity to improve and showcase their talent on the national stage. I’m really excited to be a part of and see the quality events that are going to result from CouchWarriors’ inclusion in our Sunshine state.”

Players in every fighting game at QLD Ranking Battles will also earn local ranking points. As with all CouchWarriors and FGC monthly events, all players are encouraged to build their local scenes by playing in any games they would like to learn or compete in.

Finally, the combined organisation will work together on BAM, and develop a new Queensland based FGC major to take place in 2019, filling a vacant spot in the Australian fighting game calendar.  More details on the new event will be announced later this year.

Ongoing events will partner with venues at QUT Esports in Brisbane, and Checkpoint Esports Bar in the Gold Coast.  Bar owner Luke Mengler, in support of the QLD fighting game scene, stated:

“Checkpoint is excited to partner with CouchWarriors to help expand the Queensland grass roots scene into professionally run tournaments and help the community grow and provide better prizes and competitions that has never been provided before in Queensland.

We are also excited to help bring back a FGC major event to showcase the local talent against our interstate and international rivals.”

CouchWarriors, established 2016, is an expert in gaming tournaments and esports events.  A community run not for profit with over 10 years experience, grown from the vibrant fighting game community.

As hosts of Australia’s largest fighting game event, and one of the biggest community gaming events in the country, CouchWarriors is proud to make this first announcement.

Each of the last few years has been a record breaker, with over 800 players and spectators enjoying BAM8 last year, we have much more in store in 2017.

Watch the announce video to see why this year’s theme is “BIG BAM”.

Hosted in two bays of Melbourne’s famous convention centre, with more space than ever. A major gaming and esports festival for the Fighting Game Community. More BIG announcements to come. 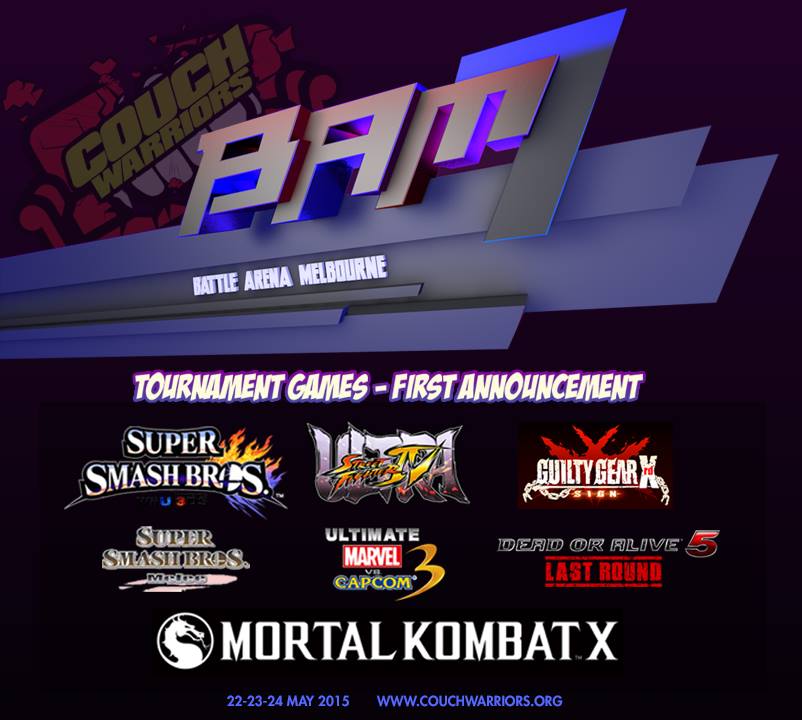