Tracking Down BAM’s “Most Wanted” Players…

About a month ago, we announced that the classic “BAM Bounties” contest would return at Battle Arena Melbourne 2022. Top players from each of the CouchWarriors League featured games will enter the major with a price on their heads! If you’re the first to best these players in their favorite game over the weekend, you can immediately cash in for a bonus prize. Sounds good, right? Not so fast. These aren’t just random schmucks who lucked into the odd win; with months of bruising competition under their belts already in 2022, our CWL leaders have more than proven their credentials as champions of their chosen games. They’re some of the most exciting and experienced players in the Oceanic FGC!

So to make sure you’re prepared for BAM2022 (in less than 2 weeks!), let’s take a closer look at who you’ll be trying to take down…

Traditionally one of the most even games in terms of elite talent across the region, Street Fighter has pretty much been the RoF show of late.

After only occasionally touching the CWL leaderboard in 2021, this decorated veteran returned at full force to sweep his first three events of this year. Dazzling confidence and technique had RoF on a whopping 40 points heading into April!

Nobody stays perfect forever, and this streak was eventually shattered by his old rival Somniac during our stacked April CWL Online. Notably, this was the first ranking tournament played on the new “Definitive” update for SFV. RoF also skipped the Victorian Ranbat later that month, allowing local rivals to close in on his points total.

RoF’s most recent appearance in CWL was getting smoked as Juri – certainly a different look to the terrifying competitor we’ve watched all year.

Street Fighter TO (and #22 ranked CWL competitor) Schenkhan offered some insight on this potential turning point for the season:

RoF has been very dominant in his performances throughout 2022. However, the most recent balance patch has thrown a spanner in the works.

Every character in the cast has received changes and the majority are now stronger than last year. Birdie happened to be one of the odd few that didn’t receive much, but that’s not going to stop RoF from demonstrating his prowess with the character. Other notable players in our region have been performing much better since then, and it appears to have levelled the playing field.

We should see a very interesting tournament at BAM. Players from all over Australia and even some of the best from New Zealand are flying to Melbourne to stake their claim as the next SFV Champion.

It would be foolish to write off one of our most accomplished world warriors as an easy mark, especially given an extra month of practice time under the new patch conditions since that last loss. But the events of April may have exposed a crack in his armour, and given some hope to challengers that his bounty might actually be claimed.

The Smash Ultimate leaderboard for the early months of 2022 is a great advertisement for the health of the game across all states. A huge number of players have shown up at their locals or CWL Online monthlies and walked away with some points. But in spite of that, the actual points lead going into BAM is something of a two-horse race.

#1 Young Link main Kanga|Jdizzle has been holding onto the #1 spot on our leaderboards since the season began in February, but a pivotal win at April’s Vic Ranbat has GG|Sriks breathing down his neck. Now just two points separate the pair, and Jdizzle hasn’t been able to put in the kind of preparation he’d normally like to; a situation which led to him reconsidering a potential trip to Genesis 8 last month. 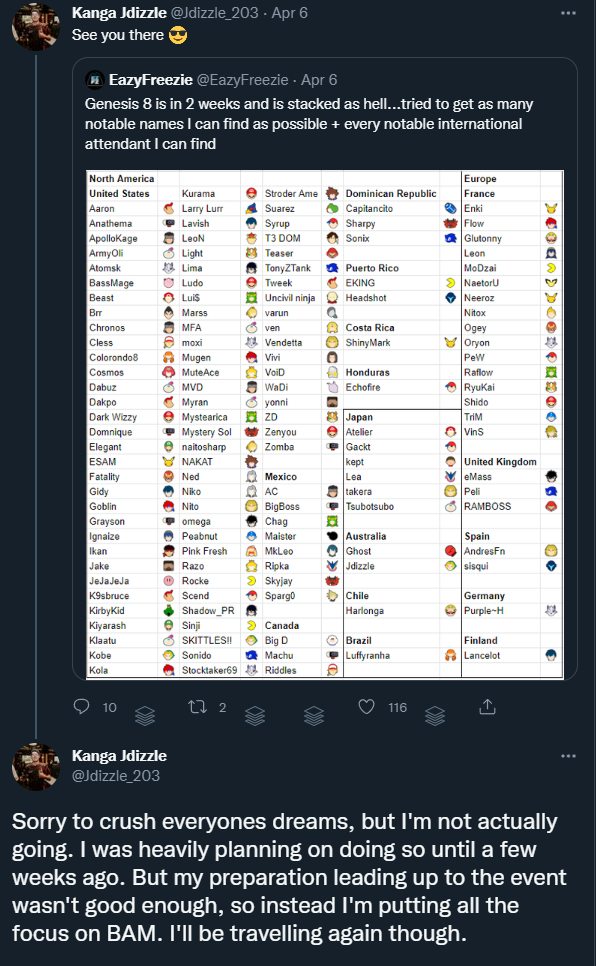 Jdizzle’s run has been interesting. If anything he’s been showing some cracks in his gameplan with key losses in certain tournaments.

It’s not enough to drop him off of 1st on the ladder just yet, but it’s gonna be interesting seeing what happens going forward with players like Sriks (who just recently moved to Vic from ACT) rapidly closing the gap on his position.

The point regarding Sriks’s big move is very relevant. Even with CWL monthlies running offline in three states, there are still elite players limited by their lack of points opportunities. Defending CWL champion Fryd Ryce and 2021 SWT qualifier GG|Kinaji have dominated all CWL Online events this year, splitting Grand Finals in both March and April. Yet they are barely maintaining Top 5 spots on the overall leaderboard, due to the reduced points award for online play.

Heaven, the third ranked player and highest from South Australia, also has a solid argument for being underrated. Despite his local Cheese League running the same number of events as the Vic Ranbat in 2022, Jdizzle and Sriks both got a head start by playing the February Queensland Ranbat too – leaving them a full finish of points ahead!

BAM is always the perfect place to ultimately decide such questions of top-player status, and it looks like Jdizzle will have to reckon with a few of them. But if you ask the man himself, there’s no such doubts in the picture – just smooth, confident sailing to another big win.

If the competition at the top of our other games is considered “close”, then our top 10 spread of players for CWL Guilty Gear is a knife fight in a broom cupboard. Almost every ranking event for 2022 has elevated a new winner into this champion’s circle, except for current rank #1 player BlitzkrieG.

They were able to snatch the trophy in both March and April Vic ranbats, adding respectable top 4s in the online events as well. All this adds up to a narrow but well-earned 4-point lead over one of our 2021 co-champions, eveAZN, with an even smaller gap to M. Baiken and Tito_Ed. The latter, our champion from April’s online, is on an incredible run of form, as is the man he edged out – Zato expert TB.

But it wasn’t his infamous Zato which secured TB a grand finals appearance in that event after a monster loser’s side run, or earned him Player of the Week accolades. It was his Happy Chaos.

While BlitzkrieG’s 4th place finish was enough to hold onto his points lead, the increasing use of secondary characters among top 8 players show how fast the CWL tournament meta is still evolving. For now, BlitzkrieG stands at the top of the food chain; but BAM will be his sternest test yet if he wants to keep that spot.

After looking at these close leaderboard races and evenly matched rivals, it’s nice to see one game where the bounty head is far and away the biggest, baddest points winner in the land. The phenomenon known as 6 weetbix might be shouting out cereal, but its the opposition he’s been eating for breakfast since the 2022 season started!

A combination of consistently high finishes both online and offline has been the key to 6 weetbix’s success. Across 3 months of CWL Online and 2 months of Cheese League his single worst finish was 3rd place in an offline ranbat. That’s still good for 12 points!

But TO and commentator Brownman warns that the current points leader is just the tip of the spear when it comes to the Cheese League’s Tekken talent.

South Australia showed up in force in 2021, dominating the leaderboard. This year it seems that they are attempting to do the same, led by Da Bix. Will anyone be able to stop them?!

2021 CWL Tekken champion Subject was held to 9th, but as Brownman puts it:

“He definitely has that tournament power-up ability to come out in the clutch, and remain composed to take W’s.”

And only slightly further back fan-favorite Wo added yet another  strong SA representative.

With so many players and characters represented at a high level, the gauntlet has been thrown down to other states and communities to step up and be competitive at BAM, lest that top 8 look equally one-sided! So, which of these bounties will be claimed during BAM weekend? Will any of them?? You can try your own luck or just go to watch live and soak in the venue atmosphere – check out the BAM website for sign-up details. And of course, you can find stream links and live leaderboards over at the CouchWarriors League website! See you all at BAM2022!