First off, at its core DBFZ borrows elements of air-dasher fighters (games with strong aerial movement seen in Guilty Gear and Blazblue) and elements of “team” mechanics seen in Marvel vs Capcom. Interestingly it has simplified both systems and has introduced some things of its own in reference to the actual show. For those that are scared to delve into the Fighting game genre, DBFZ looks to make the transition into understanding the competitive nature of fighting games much easier with its simplified mechanics. 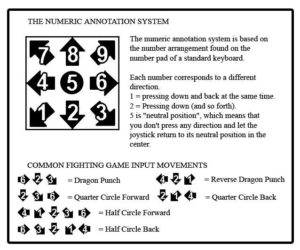 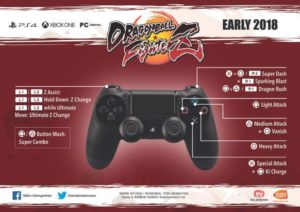 Dragonball Fighter Z at its core is a 6 button Fighter. The default controls may have 8, but the moves of Dragon Rush and Super Dash are simple combination moves that are done by pressing two of the “attack” buttons, alongside Vanish and Ki Charge.

Dragon Rush is an unblockable throw type move that can only be interrupted if you press a button during the start up of the move hitting you. It is a move that punishes people who are trying their best to block your incoming attacks.

Super Dash is a move that makes the character leave the ground and then immediately air charge at their opponent and homes in on them. This is a move that many will gravitate towards in hopes of closing the gap to mount an offensive. More on this later.

Spending 1 bar of Meter you are able to disappear and reappear behind your opponent and strike them from behind. This move is handy when you are trapped in the corner and need a get out of jail card, but be aware that is comes with some meter cost!

This move is a one use upgrade that increases your team’s damage and regenerates their blue health. For every character you have less, Sparking lasts longer. For players of Marvel Vs Capcom 3, this is very similar to “X Factor”.

Here are a few tips and tricks to take you beyond the tutorial, and onto playing like a pro:

Manual combos are much more effective than auto combos.

DBFZ allows players to easily have access to one button combos. The issue is that if you look deeper into the mechanics, you benefit much more from actually inputting your own manual combo.

In this auto combo(linked in the tweet below), we see that Goku does a little bit of damage and loses meter in exchange of finishing off with a Super Move.

Most characters follow the “LMH rule”. Meaning that you are able to link Light into Medium into Heavy attacks. You are also able to “Jump Cancel” moves to continue combos and cut the vulnerability of your blocked or hit attacks.

If you would like an idea of how much more useful and powerful manual combos are, I highly recommend trying out Goku in Practice mode and try using this combo:

Immediately you notice that when you do this combo, not only do you do more damage, but you don’t even waste any meter. In fact, you GAIN meter and the opponent is put in a “hard knockdown” state in which you can use Super Moves to increase damage.

Using Goku’s other specials you are able to do amazing combos like this using the various mechanics of the game.

If you look around you may see videos in which (like in my video above) where the opponent gets hit into the ground and lingers long enough to be hit by a Super Move. This is what is known the fighting game genre as an OTG (Off the Ground) State in which the opponent is still able to be attacked while in this state.

To achieve this OTG state, two prerequisites must be met.

1) You must do a 2H launcher chase. This can be done in the air or on the ground.

2) You must end your air combo with H. This move will spike the opponenet down leaving them in the aforementioned OTG state.

Or for the air variant

The hard knockdown mechanic is a very useful thing to know since it will either give you time to properly remount an offensive on your opponent that is waking up, or simply follow up on their knockdown state with a super.

If a hard knockdown is not achieved the opponent can simply recover and block any following move or action. There are certain moves that characters have that can also achieve this hard knockdown state such as Goku’s Dragon Flash Fist.

Block Low is your default

In the world of air dash fighters such as Guilty Gear and Blazblue, the usual defensive suggestion is to block low. This is due to being able to block most things if you are blocking low. If you are blocking high you are very susceptible to unseeable lows that you cannot react to. If you block low, the moves that can hit you in a crouched state (such as 6M, the universal “overhead” that every character possesses, or any aerial attack) have slower startup and thus can be reacted to if you are anticipating them. This is not an easy task but it is much more favourable for you if you block low first and then react to any slower options that can “mix you up” (such as aerials, overhead moves that hit you in a crouched state, or Dragon Rush)

Make use of your assists

Assists can be used for more than saving your hide when you have low hp or for Tagging Supers because they are (admittedly) very cool! Assists can be used to cover your slower weaknesses when you are applying pressure. Try pressing the Assist button before running at your opponent so that there is an attack to cover your approach. If the opponent tries to hit you because they see you coming in, they get hit instead (provided your assist’s move reaches them).

Airdashing can be done by pressing 6(forward) twice in the air. Once way to get very fast and proficient with movement is to shortcut the airdash by pressing

As you jump forward you have already inputted the first forward motion to start the airdash. All you need to do is let go of 9 and press 6 to initiate the air dash. This will make you offensively very scary as you can initiate aerial attacks very fast.

To the newbie eyes, Super Dash and Vanishes seem quite powerful at first glance. But in reality, these moves aren’t very strong if the opponent knows how to handle them

*Super Dash is launchable with 2H

*Super Dash on block does not give you the advantage

*Vanish used without a combo cannot be followed up, which is a waste of a bar of meter.

However, keeping these weaknesses in mind, it is important to understand the strengths of both these tools.

Super Dash is very good when used rarely and decisively to mount a surprise attack. Do not be predictable.

Last but not least, and this is the most important aspect:

Enjoy the art of learning about the depth of Dragonball Fighter Z!

DBFZ is a game that has opened the floodgates for fans and gamers world wide. It is a chance for fans of DBZ and fans of games to delve into a very easily accessible game that has a lot of depth to it.Months from now people will still be trying to work out new things to do in this game, whether you are a casual gamer that enjoys playing the story mode, or a seasoned competitor that wants to improve at the game by learning the mechanics.

Dragonball Fighter Z has a healthy amount of beauty, creativity, and enough depth to keep people interested in for a long time. It may be daunting at first to delve into the intricacies of this game, but I assure you, as a terrible player myself in the grand scheme of things, there is nothing more satisfying than seeing yourself improve at this (and other) fighting games.

Also…doing combos in this game ROCKS THE DRAGON!

Variation of my last combo with no spark but added end. Note that you can the chase ender onthe spark1 too #PS4share pic.twitter.com/a7J8ZxEQyi